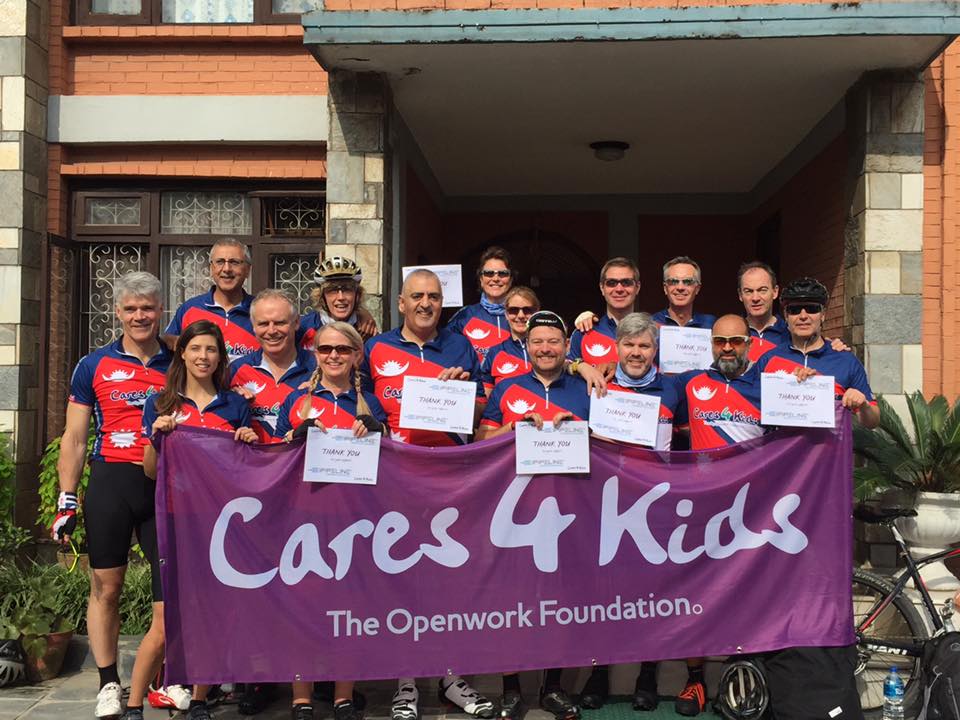 After a full day travelling we arrived in Kathmandu, Nepal and checked into our hotel for the first night. We were too late to set up our bikes on Saturday, so this was left until Sunday morning until just before the first days ride.

Saturday evening’s meal was at a local Nepalese Restaurant in Kathmandu and many of us tried a local curry which was delicious.

Sunday morning was an early start as we had to leave at 7:45am to get to the bikes, to set them up with the saddles and pedals that we had brought with us.

Team photo done, Big Mo did the warm up which is a daily ritual and leads to our daily chant, ” its all for the kids”!

I had the privilege of having Ted the Openwork Foundation bear with me on the first day, so he was with me on my bike and at lunch and dinner before he was passed over to his next foster parent.

The cycling on the first day was supposed to be the easiest of the week, but if that’s the case then the next 5 days will be tough! The views are spectacular though… 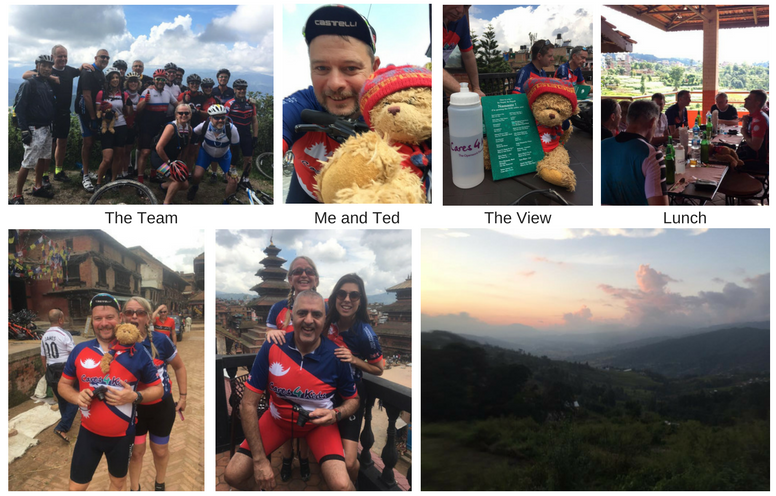 We cycled 25 miles, which would normally have been an easy day but there was 3,300 feet of climbing, a lot of which was off road over loose rocks and boulders.

We had 6 falls during the day, one of which was me! Plus Sam, Devesh, Sanjay (twice and once very spectacularly over the handlebars), Toby and Colin. Luckily no real injuries.

We visited Bhaktapur for a lovely lunch and toured the 3 main squares. We saw a lot of buildings that were damaged by last year’s earthquake.

After lunch it was virtually all uphill, including a very technical off road section. Believing this was going to be an easy day, promised by our UK guide Colin, we soon realised it was going to be extremely hard and, in fact, for the second year in a row we did the last bit of the ride in the dark, with no lights, which was interesting.

A quick change and then dinner, which was lovely.

Then we had the official blog post by Sam and the awards. The awards for today went to Sandy (Snoopy) for most spectacular fall of the day and to Devesh, who got the buff scarf for plodding along at his own pace and finishing the day.

My last official duty looking after Ted was to decide who would look after him tomorrow and I passed that honour to Cat, so she is not too lonely, as her partner, Tom, who we lost in China (another story), said to her it would be great to do the next ride together and then did not come!

All in all a great day and can’t wait for day 2.