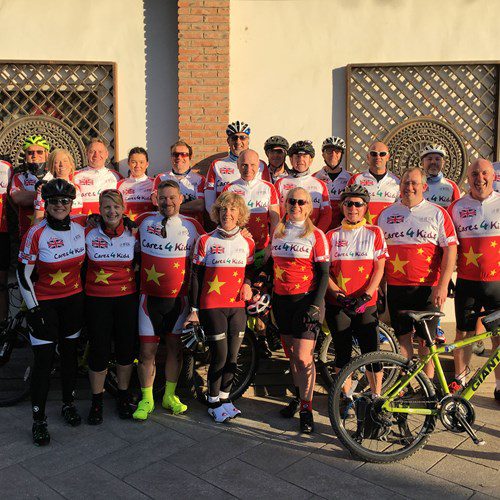 Day 1 in the Saddle – 108km: Changping to Beyond Yangquing

What a day that was!

We were supposed to cycle 83km today but this year’s Cycle Challenge happens to be taking place one week after the county lodges close for the season and this means we need to cycle another 25km to reach a lodge that will be open. We ended up climbing a total of 5,521 feet with about seven hours in the saddle.

We woke early for breakfast today and that is when the first incident of the day occurred. Lesley McMillan was ‘egg static’ as she bit into her fried egg sandwich and egg yolk shot over her face and hair.

Breakfast done and we gathered outside in freezing conditions as smoke clouds formed from our excited chatter. With the team photo taken, and Ted in Ramon Puig’s possession (a penalty for buying Japanese Yen not Chinese Yuan!), today’s warm up was led by Mo Rasool – Ireland-style with lots of stretching and, of course, lots of good luck hugs.

Overnight, the crew had managed to locate a bike for big Mo (I’m sure that when they had everyone’s sizes they saw Mo’s 6ft 4in height and thought it must be a mistake).

So, after the warm up, we set off and for a while it seemed as if our worries after being briefed about the climb were unfounded. However, we soon found out that was wrong as we hit the first climb closely followed by the second before we got to lunch! Lunch was in a bustling town with some flavoursome food; a tremendous hit enjoyed by all.

After lunch, due to the distance we still had to travel, we had to head off quickly with only a few breaks to ensure we made it to the lodge before dark. This was when we had the third and hardest climb of the day, which just went on and on. Throughout the day we have had amazing views, catching our first glimpse of the Great Wall.

After our one and only refreshment stop after lunch everyone made it through the final miles to the lodge. All in all a great day, and a huge achievement for everyone to make it to the lodge before dark so well done to you all!

David Ridley is now a honed athlete after his recent weight loss, and led us for most of the morning.

Today’s Achievement Award has to go to to Lesley McMillan for digging really deep, missing the last break and coming up through the group in the final leg after finding the first day so tough.

Today’s Kung Fu Panda Award goes to Karen Peedle for stopping at the wrong break-stop. She ended up at a stop for Chinese road time-trialists. It took her some time before she realised none of the team was there.

Ted was handed to Sam Sinclair because she’s in a single room and missing her Dad, Davie, who couldn’t make it this year…but we’re waiting for you in 2016 Davie!!

This was our first day, the longest day, and we were suffering from jet lag but WE DID IT!