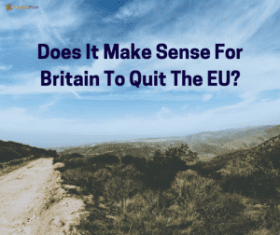 Does It Make Sense For Britain To Quit The EU?

However it is eventually phrased on the ballot paper, the underlying question is essentially the same. “Should Britain stay in the EU?”

Sometime between now and the end of 2017, the great British public will be required to answer it. So, is the grass really greener on the other side of the EU fence? What would happen if the UK actually did leave the EU? Let’s look at some of the key points of EU membership and see how the UK might be affected in the event of a “Brexit”.

The free movement of citizens is a key part of the Maastricht Treaty and therefore of the EU. It is what enables Polish workers to come to the UK. It is also what enables British retirees to make their homes in sunnier climates. Polish workers compete against local job seekers. British retirees may need to make use of their host-country’s medical facilities. There are economic pros and cons to many aspects of EU membership.

There are also security issues to consider. The recent “I am an Immigrant” campaign stressed the positive contribution immigrants make to the UK. At the same time, British teenager Alice Gross is believed to have been murdered by Latvian builder Arnis Zalkalns. He already had a conviction for murder in his home country. The EU’s open-borders policy, however, allowed him to come to the UK regardless.

There have also been issues with Polish criminals organizing sham marriages with people who want UK residency.

Likewise, there are ongoing issues with the Eurotunnel being targeting by refugees living in France.

Free Movement of Goods, Capital And Services (AKA The Common Market)

In fact it allows people from the UK to go on shopping sprees in the EU and bring their purchases back to the UK without paying customs duty. In the early days of the EU this led to the infamous “booze cruises”. These were trips made, usually to France, specifically to buy alcohol more affordably.

Small and light, cigarettes are also easily brought back from other EU countries where the purchase price is lower. Of course, this has implications for the NHS and its funding.

Like the free movement of citizens, there are pros and cons to the single market. It is also worth noting that the UK already trades on a global basis in any case. This demonstrates that it is quite possible to import and export without a free-trade agreement being in place.

During the negotiations for the Maastricht Treaty, the basis for the modern EU, the UK opted out of the single currency.

It did, however, sign up to a clause in the treaty which requires EU members to aim for “ever closer union”. This is not just a statement of ideals. It is a legally-binding requirement. In very simple terms, the UK’s decision to keep the pound is directly contradictory to the principle of “ever closer union”.

This raises significant legal questions over the feasibility of the UK keeping the pound in the long term. David Cameron has stated that he aims to negotiate and opt-out to this requirement. The price of him achieving this may be giving up the UK’s veto in the EU. The price of him not achieving this may be the UK’s giving up the pound and adopting the Euro.