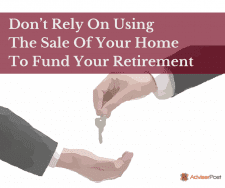 As with any major reform to savings, pensions and investments, the recent government changes to annuities has been accompanied by a flurry of newspaper headlines, ranging from the alarming to the surreal.

Deciding how you will fund your retirement is one of the biggest financial decisions you will ever make and one that cannot be taken lightly, but often the information overload that happens courtesy of the media can leave savers feeling more uncertain than ever.

It is tempting in this situation to rely on a tried and trusted method of funding a retirement, the accumulation of equity in a property, but this might not be the safest and most effective way of paying for a retirement.

Using a property to pay for retirement is always gamble because savers have to make educated guesses on the robustness of the property market in the future when they eventually come to sell.

There might be scope for many people to profit if they act fast, sell up when property prices are high, and invest the equity.

The Bank of England’s Monetary Policy Committee is almost certain to put up interest rates after the next general election and there is no guarantee after May next year that Help to Buy will continue in its present form, with some schemes encountering difficulties already.

In the last year the pension market has undergone some radical changes and the options for savers and those who are due to benefit from their pensions have increased.

With the end of compulsory annuities on most pensions, savers have more flexibility to draw down a lump sum of their nest egg at retirement.

Paying off a mortgage or wiping out remaining debt in one go might be more cost effective solution for retirees than simply being tied to an annuity payment.

In September it was announced that pensions could become tax efficient savings funds, not just designed for paying an income later in life but also a way of passing on a pension pot to the next generation.

From April, anyone inheriting a pension fund will have no tax to pay on it (previously it was taxed at an eye watering 55 percent).

It is not possible to leave an annuity policy in a will to a family member and as a result of the announced changes, annuities may become even less attractive as a means of managing ones pension income.

Some 12 million people in the UK in defined contribution pension schemes will be affected by the changes and they will be able to pass their pensions on without incurring penalties for inheritance tax if they are over the age of 75 when they decide to do so.

The government, with next year’s election in mind is looking to offer the electorate a reduction in the taxation burden on pensions and inheritance, and in this way they have given future retirees a lot more options.

If you are uncertain about how best to provide for you and your loved ones in the future, it might be an idea to seek some advice to give you an informed opinion on your possible choices.

To find out more about the options available, speak with a financial advisor.

THE VALUE OF INVESTMENTS AND INCOME FROM THEM MAY GO DOWN. YOU MAY NOT GET BACK THE ORIGINAL AMOUNT INVESTED