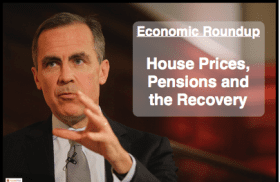 House Prices, Pensions and the Recovery

In the past few months the clouds have parted, the gloom has lifted, and Britain is booming. Unemployment is down, investment over the past three years is up, and all is well. The recession is over and no one needs to worry about anything.

The relentless upbeat forecasts and the fact that a general election is now ten months away are in no way connected and merely coincidental; after all, with things being so positive, why wouldn’t the government want people to know?

Of course there are hidden dangers in our currently bullish outlook on the state of the country, the main one being our collective temptation to go back to the good old days of 2007.

Much of the rhetoric coming from the media in the past few months has been based around the notion that the tough times are over and that we will be able to enjoy life the way we did before the crisis.

This, as many of us know, is a fantasy, which isn’t to say that we must exist in penury for ever more, but the patterns of spending and borrowing that developed between 1997 and 2007 are a luxury that none of us can afford.

If the country really has economically recovered (something that none of us can really take for granted), and if it is a recovery that can sustain itself in the long term (again, questionable), we must still accept the extent to which our individual and national circumstances have changed.

Housing, pensions, and savings are key areas where it is essential to be vigilant; economic confidence should not translate into complacency.

Britain is experiencing a housing boom not dissimilar to the one that reached its peak ten years ago.

At about the time Sarah Beeny and Laurence Llewelyn-Bowen dominated the TV schedules with property makeover TV, the rest of the country was obsessed, Dutch tulips style, with their ever increasing property prices.

A few savvy investors saw the housing boom for what it was, an opportunity to buy cheap, sell high and get out of the market as quickly as possible before it imploded.

Many others, less experienced and more trusting, who borrowed their way into negative equity and when the value of their new home nose-dived, were stuck with huge repayments and a property that had been over valued.

George Osborne, in need of something to kick start the economy after the effects of his post recession austerity hit home, chose the property market.

The Help To Buy scheme, originally intended to assist first time buyers get a foot on the property ladder, offered them a loan of up to twenty percent of the value of a new home up to the price of £600,000.

Previously, getting together a 25 per cent deposit on a home had been almost impossible for most medium income families, but finding 5 per cent was much more realistic. The scheme began to overheat the housing market, particularly in the South East, once it was rolled out to all buyers.

Quickly the possibility of purchasing properties well beyond ones’ means developed, which was exciting news for the impulsive and naive, but now presents the rest of Britain’s home owners with something of a quandary.

In a bid to slow down the housing market, in April this year the government imposed strict new lending regulations on banks and building societies, ensuring that borrowers would have to prove they had a saintly credit history and minimal debt commitments.

Strict limits on the amounts that could be borrowed were imposed as the government struggled to rein in the housing market that looked in imminent danger of spiraling out of control.

The biggest challenge to home owners, however, is yet to come. The Monetary Policy Committee of the Bank Of England, led by Governor Mark Carney, have been debating the issue of a rise in the base rate of interest for the last twelve months.

As the economy improves, the historically unprecedented 0.5 percent base rate of interest that has kept the country from collapse for the past half decade looks set to be increased. Carney, making his annual Mansion House speech, strongly hinted at a rate rise last month.

This might be bad news for home owners as more of their available income is sucked up into mortgage repayments, but it also means that in the urgent task for most people is to renew or to move onto a fixed rate mortgage deal.

The banks, predictably, have started to put the costs of their fixed rate mortgage deals up, knowing that there will shortly be a surge in demand for such products.

The combined effect of potential rate rises and new restrictions seems to have temporarily taken the heat out of the housing market, but how long this will last for us uncertain.

For some, Mark Carney’s words will be gratefully received; an interest rate rise for savers will be not dissimilar to the first drops of rain after a long drought.

Since 2008 savers have seen precious little return from their nest eggs and, not unreasonably, have felt that the low interest rates have penalised them unfairly.

Savers, after all, have been prudent with their money and much of the reason for the nation’s current straightened circumstances is down to excessive and imprudent spending and borrowing.

Pensioners and older people who have used the interest on savings to pay for day to day expenses have experienced a significant shortfall in their financial well being in the past half decade.

Interest rate increases in the coming year might only be marginal but for savers they will be a step in the right direction.

Throughout the recession, pensioners have seen their primary source of income, their pension, affected by the crises in the annuities market.

The slump in annuities meant that low returns on pensions became widespread, which in part explained the widespread jubilation when the Chancellor of the Exchequer made annuity policies non mandatory for a range of pension types.

The Daily Mail recently reported that pensioner’s incomes have only just started to rise above the rate of inflation for the first time since 2011.

On average, pensioner households were receiving £503 a week in 2009; an amount that had decreased to £477 a week by last year. The figures, compiled by the Office Of National Statistics are a retrospective analysis of income so 2014 figures have yet to be calculated.

The brief boom that the government unleashed in the housing market will probably taper off in the next two years.

Strict lending limits and a rising cost of borrowing will allow a degree of sanity to re-establish itself, though this will mean that prices will probably remain both high and stable as fewer people are able to borrow beyond their means.

Savings will also become better rewarded as interest rates rise, but much of this rests on the future performance of the economy.

The fall in unemployment is in large part due to an increase in zero hours contracts, freelance work, part time hours, and low wage jobs; the government describe this as workforce flexibility but for many it is a precarious existence.

A low wage economy with high property prices and an ever shrinking welfare safety net tends to lead to an increase in consumer borrowing to make ends meet, and inevitably to defaults and a credit crisis somewhere down the line.

The impact of a departure from the union of Scotland, which may still happen in September, might also cause major disruptions to the economy, as would the possible departure of Britain from the European Union.

These wild card factors, along with our current hyper-flexible and insecure working population make it too soon to say whether or not we have got a lasting and robust recovery.

If that recovery is derailed, the Bank Of England will very quickly retreat from plans to put the rate of interest up.

In the long run an interest rate rise is probably the healthiest thing for the economy, incentivising saving and cooling a super hot housing market are both worthwhile objectives.

YOUR HOME MAY BE REPOSSESSED IF YOU DO NOT KEEP UP REPAYMENTS ON YOUR MORTGAGE.